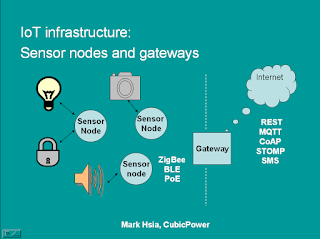 IoT infrastructure consists of Sensor nodes and gateways. Sensor nodes collect data and control devices. The gateways connect to both sensor nodes and internet. ZigBee, Bluetooth Low Energy (BLE), or Power over Ethernet (PoE) can be used  to link  sensor nodes and gateways.  ZigBee is  secured by 128-bit symmetric encryption keys within a range of 10 to 100m depending on the transmission power. Gateways are used as routers and firewall. They transform and normalize the data and also transform protocols. Common protocols connecting gateways and internet are REST, MQTT, CoAP, STOMP and even SMS.

Tutorial: Prototyping a Sensor Node and IoT Gateway with Arduino and Raspberry Pi - Part 1 - The New Stack
My Notes:
Industrial IoT requires a robust infrastructure comprised of sensor nodes, energy-efficient communication networks, and gateways that  connect to the Internet and cloud.

The communication link between the sensors’ nodes and the central hub is based on
ZigBee, Bluetooth Low Energy (BLE), or Power over Ethernet (PoE).

gateways play the dual role of routers and firewall securing the sensor nodes and internal network.

One of the first jobs of the gateway is to transform and normalize the data.

The second role of an IoT gateway is protocol transformation.

The datasets generated by the sensor nodes may rely on JSON or CSV.

Some of the popular outbound protocols used in the context of IoT are REST, MQTT, CoAP, STOMP and even SMS.

My Notes:
XBee modules make it easy to create a wireless point-to-point or mesh network.

XBee is treated as a serial port to send and receive data using the standard UART clients.

Freeboard is an open source visualization and dashboard tool.

Freeboard can be integrated with any REST endpoint that emits valid JSON output.